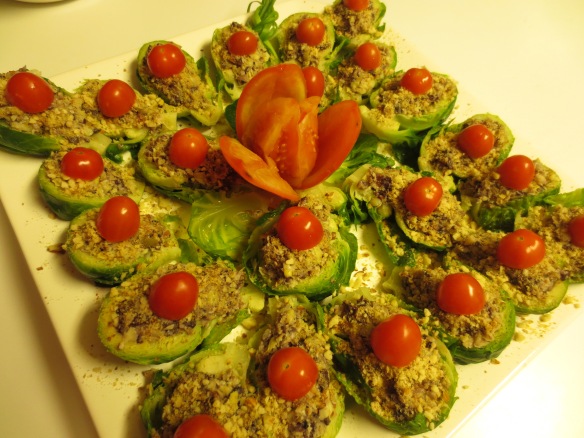 After watching dinner guests take a pass when plain, steamed Brussels sprouts came to the table, I became aware they were not on everyone’s list of favorite vegetables. But when I stuffed them and served them as an eye-appealing appetizer, they proved their mojo.

cookbook. It’s in the Christmas section, but don’t pay any attention to that. Serve them all season long. They’re perfect for Thanksgiving, Hanukkah, Christmas, Kwanzaa, and New Years, too!

I’ve also noticed an encouraging new trend in recent years. Attitudes are changing about green vegetables as the vegan message about their health benefits jumps into the mainstream. How nice to see the turnabout, especially for Brussels, a vegetable that used to be left languishing on the plate at the end of the meal.

Today Brussels sprouts have climbed pretty close to the top of the favorite list. At farmer’s markets and some of the more vegetable-savvy groceries, they come to market still attached to their tall, thick stalks and looking very perky and inviting.

Last year, just before Thanksgiving, those 2-foot long stalks showed up at my local Trader Joe’s market. While checking out, I couldn’t help noticing how popular they’ve become. About every third shopping cart had a stalk of Brussels. I bought two of them, knowing this recipe was sitting on my kitchen counter waiting for me to dig right in.